An explanation of the chakras, and their role in understanding the interactions between the body and the consciousness within.

A key to understanding the inner causes to outer symptoms.

More on each Chakras

What is a Chakra ?

Chakra is a Sanskrit word meaning wheel, or vortex, and it refers to each of the seven energy centers of which our consciousness, our energy system, is composed. These chakras, or energy centers, function as pumps or valves, regulating the flow of energy through our energy system. The functioning of the chakras reflects decisions we make concerning how we choose to respond to conditions in our life. We open and close these valves when we decide what to think, and what to feel, and through which perceptual filter we choose to experience the world around us. The chakras are not physical. They are aspects of consciousness in the same way that the auras are aspects of consciousness. The chakras are more dense than the auras, but not as dense as the physical body. They interact with the physical body through two major vehicles, the endocrine system and the nervous system. Each of the seven chakras is associated with one of the seven endocrine glands, and also with a group of nerves called a plexus. Thus, each chakra can be associated with particular parts of the body and particular functions within the body controlled by that plexus or that endocrine gland associated with that chakra.
All of your senses, all of your perceptions, all of your possible states of awareness, everything it is possible for you to experience, can be divided into seven categories. Each category can be associated with a particular chakra. Thus, the chakras represent not only particular parts of your physical body, but also particular parts of your consciousness.
When you feel tension in your consciousness, you feel it in the chakra associated with that part of your consciousness experiencing the stress, and in the parts of the physical body associated with that chakra. Where you feel the stress depends upon why you feel the stress. The tension in the chakra is detected by the nerves of the plexus associated with that chakra, and transmitted to the parts of the body controlled by that plexus. When the tension continues over a period of time, or to a particular level of intensity, the person creates a symptom on the physical level.

The language of symptoms

The symptom speaks a language that reflects the idea that we each create our reality, and the metaphoric significance of the symptom becomes apparent when the symptom is described from that point of view. Thus, rather than saying, “I can’t see,” the person would describe it as keeping themselves from seeing something. “I can’t walk,” means the person has been keeping themselves from walking away from a situation in which they are unhappy. And so on.
The symptom served to communicate to the person through their body what they had been doing to themselves in their consciousness.
When the person changes something about their way of being, getting the message communicated by the symptom, the symptom has no further reason for being, and it can be released, according to whatever the person allows themselves to believe is possible.
We believe everything is possible.
We believe that anything can be healed. It’s just a question of how to do it.
Understanding the chakras allows you to understand the relationship between your consciousness and your body, and to thus see your body as a map of your consciousness. It gives you a better understanding of yourself and those around you.
What else is there?

Visual Representation of the Mirror Body System for Healing and Self-knowledge.
Developed by Martin Brofman.

We have a Chakra Reference Chart which shows the Body/Mind Interface through the chakras, relating specific chakras to specific parts of the consciousness, and specific parts of the body. Please feel free to print this page, save it on your computer, and share it with those who would find it useful and helpful. You’ll need to have Adobe Acrobat Reader.
To see the Chakra Reference Chart page in Acrobat (.pdf) format for printing, Click on the next image. 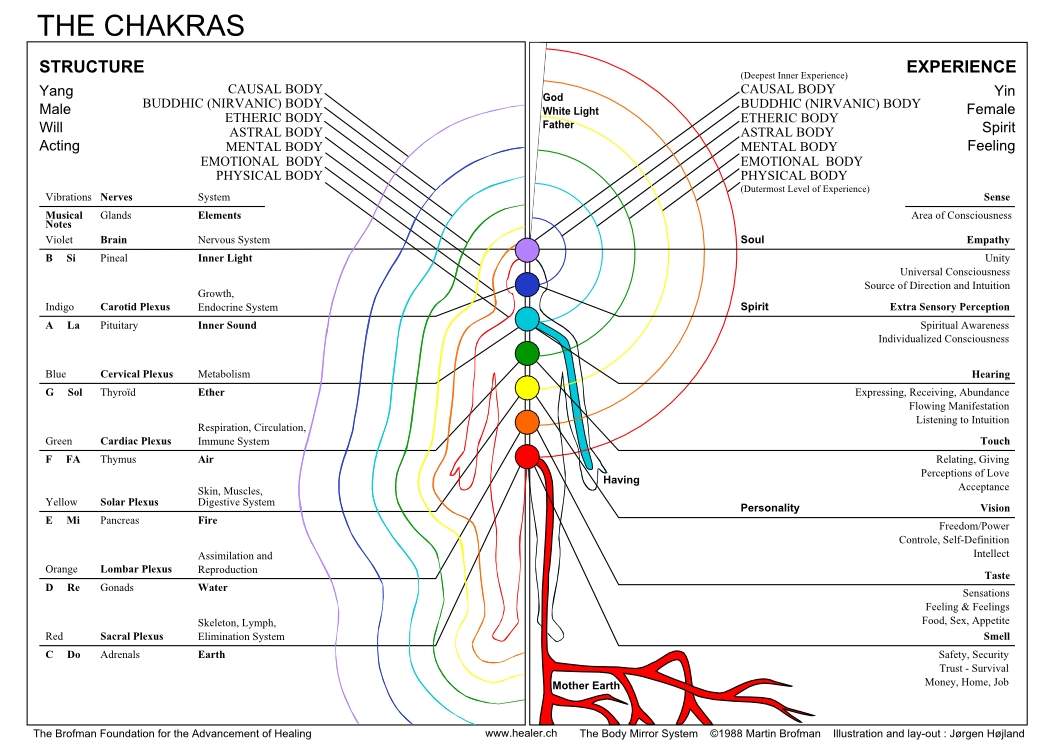